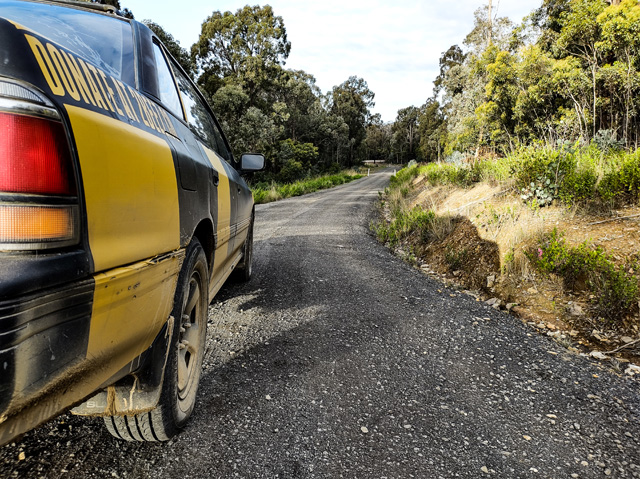 It’s Sunday the 20th of June and we’re on the road to Heyfield. We’re making an event site check and RallySafe course data logging on Gippsland Rally.

The organisation of any rally is highly detailed. Mapping and timing is crucial to any event. Alternative routes are also essential because sometimes things don’t go to plan, this is the nature of rally.

If you’ve been to a George Derrick Memorial Rally or Win TV Rally in the Valley in the last 25 years, you’ll know these roads! 🙂 Stage one is brilliant! It’s mostly uphill with very wide roads climbing in a rhythmic series. The roads are lined with small shrubs either side of the road up to waste height as a result of fire break clearing. This gives good visibility of the road ahead and willing crews to use more than the defined road.

Crews will be really flying through these sections. The characteristics of the roads are medium flowing bends uphill and then punctuated with hard rights as you reach the end point of a ridge. Then it’s the same again with lefts on the other side of the ridge. It’s rhythm like a catchy musical score.

The surface is a quartz and clay mixture with intermittent sections of blue screenings, in very good condition… perfect!

The spectator point on the stage is wide and open with a triangulation in the centre. Cars enter on a fast straight, take a 90 degree left-turn into a hairpin right, then a medium sweeping left turn uphill before going through a series of bends.

Level 1 media including Motorsport Australia media will be able to walk up the road and get some great shots of the cars as they snake their way uphill. Most of the corners through this stage are on a camber so a lot of corners will be taken flat out with little to no braking.

Stage two is quite similar, although a little narrower than stage one. It definitely has a rhythmic flow to it. Drivers will get into a pattern of driving from left to right as they can see through the corners. A few come up a surprises as they are tighter and have steeps drop offs. They’re clearly marked as cautions and leaving the road at speed will be catastrophic.

There’s a section of road that undulates up and down. As crews head over crests there’s some really fast sections where the road is very very wide. Cars will be probably stretch to about 180km’s an hour… And the road seems like it’s half a kilometre wide in places. But all those fast sections are followed by a crest and another series of bends.

Stage three is narrower and downhill. The road surface in the first 800m is little bit rough, or boney as Road Director Bernard described. The rocky base beneath the road comes up above the surface gravel but it’s easygoing for a rally car.

As we were RallySafe course data logging, Bernard and I stopped at all time controls, starts, finishes and spent a considerable time assessing points for media access and the spectator point layout.

Considering the rainfall in the Gippsland area the week prior and the flooding down in the valley between Seaton, Heyfield and Traralgon the roads are in excellent condition. There’s been no affect to the surface of the roads. There’s only a small number of patches where it’s a little squishy but still even in driving on road tires we barely felt it. The surface is hard packed due to it being designed and used as logging roads.

If it’s dry during the event there will be thick dust, especially if there’s no wind as dust will tend to hang in the trees. Although because these roads run along a ridge it’s quite likely the dust will drop off the side of the road so vision for the driver’s should be excellent.

Stage 4 is a run downhill towards lake Glenmaggie. Twisty, the corners are short and sharp. This section will see most drivers hard on the anchors in most corners and they’ll definitely be red glowing brake discs by the end of the stage.

So with the RallySafe course data logging complete, we’re now seven weeks away form the rally. Stay tuned for more updates! Check out our media channels in the “Rally News” top menu.